Poland's Cardinal Glemp to play himself in film of murdered priest 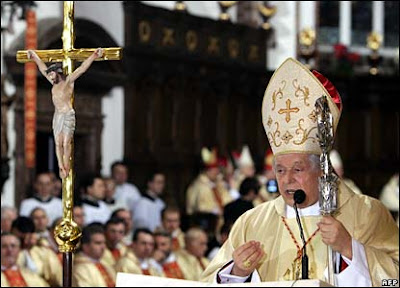 Poland's Cardinal Jozef Glemp is playing himself in a film dedicated to Father Jerzy Popieluszko, the Solidarity chaplain killed by the communist secret police in 1984, producers said Tuesday.

Glemp, who is the primate, or head, of the church in deeply Catholic Poland, reenacts real conversations he had with Popieluszko, Julita Swiercz-Wieczynska, the boss of the Focus Producers company, told AFP.

"We have already filmed the scenes with the primate. Cardinal Glemp is a natural when he's in front of the camera," said Swiercz-Wieczynska.

"He's also been a consultant, sharing his memories with us. We're making a historical film and we want to get as close as possible to reality," she said.

Make-up artists helped to take two decades off Glemp, who is now 87, so he looked more like his younger self.

The film, entitled simply "Popieluszko", is due for release late in 2008.

It stars 33-year-old Adam Woronowicz, who is mostly known for his television work, and who bears an uncanny resemblance to the eponymous priest.

The death of 37-year-old Popieluszko turned him into an enduring symbol of opposition to Poland's communist regime.

It also highlighted the crucial role played by the church, which was one of the few bulwarks against the communist authorities in this country of 38 million, where more than 90 percent of the population is Roman Catholic.

Popieluszko stood shoulder to shoulder with Solidarity, the communist bloc's first free trade union, which was founded in 1980.

After the regime's martial law crackdown on December 13, 1981, Popieluszko won renown for his sermons, which drew thousands of people to his parish chruch in Warsaw.

Popieluszko was kidnapped and tortured to death on October 19, 1984 by a three-man commando from the communist SB security police, who dumped his body in the River Vistula.

Amid widespread revulsion at the murder, Poland's then communist leader, General Wojciech Jaruzelski, took the unprecedented step of putting on trial the security police officers who carried out the killing.

Captain Grzegorz Piotrowski and Lieutenants Leszek Pekala and Waldemar Chmielewski were sentenced respectively to 25, 15 and 14 years in prison, in a high-profile 1985 trial. They were identified thanks to the priest's driver, who escaped.

All three are out of prison now, having been freed under an amnesty before serving their full sentences.

After the fall of the regime in 1989, high-ranking communist officials believed to have ordered the priest's murder were also brought to trial, but acquitted for lack of evidence.