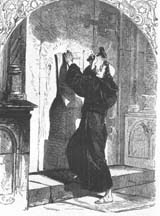 An inadvertent rebel with a cause, Martin Luther launched a revolution in ideas that altered much of Western culture.

In 1517 his call for reform in the Catholic church led "the fevered German monk to plunge a knife into the heart of an empire that had ruled for a thousand years," as the magazine Wired Science observed.

And his revising of worship, urging people to search their Bibles rather than a church hierarchy for answers to life, is a revolution in responsibility that still echoes in pews.

Moreover, with 400 books and thousands of informal talks to his credit, this independent thinker is one of the world's most prolific writers.

But while scholars place him on lists of the world's most influential people, he evokes plenty of blank looks from modern Americans.

After all, he lived half a millennium ago. How could he be important in a time of text messages and Britney Spears?

"He's not well-known, even by Lutherans, the faith that bears his name," says the Rev. Eric W. Gritsch, a professor emeritus of church history at Gettysburg (Pa.) Lutheran Seminary.

Today, Luther's legacy will be recalled at many Protestant churches in the United States, where he will be the subject of sermons.

At St. Philip's Lutheran Church on Kirkwood Highway, the Rev. Patrick Downes will celebrate Luther as a devout man with the courage to make worship more relevant in his time.

He felt everyone should have a public education and be able to read the Bible, a progressive idea for a time when 75 percent of German people could not read and write.

Today, Downes is inviting parents of elementary school students to give Bibles to their children to celebrate Luther and the Protestant Reformation, which he launched.

In the spirit of what is known as Reformation Sunday, John and Jodi Newcomber will attend St. Philip's with their extended family to present a Bible to their son Michael, who's 7.

"I have a strong Christian faith, and I want to instill it in my children," says John. "It's an important piece of our religion that each person can read and interpret scripture, rather than be told how it should be interpreted."

At St. Philip's, members will also post a document called "The 95 Theses" on the door of its church in honor of a tale long told about Luther -- that on Oct. 31, 1517, he posted 95 ideas for reform of the Catholic church on the door of the Wittenberg church.

The door functioned as a town bulletin board, and Luther posted his ideas hoping for a discussion, says Gritsch. He also sent them to an archbishop hoping to spark a positive debate within the church. Instead it led to his excommunication as a heretic.

It's because he had harsh words for one of the church's fund-raising schemes -- the selling of indulgences, or forgiveness from sin.

By purchasing an indulgence, people thought they would suffer less punishment at death. And people readily bought them, terrified for their immortal soul.

There was even a jingle that went with the sale, Gritsch says: "As soon as the coin drops in the coffin ring, a soul from purgatory springs."

To Luther, who felt that the grace of God saved believers, selling indulgences was wrong. It was in stating this reliance on God's goodness that Luther proved persuasive.

As time passed, many in Europe agreed with him, Gritsch says, and Luther was one of the first authors to experience the power of the printing press, which Johann Gutenberg invented in the 1430s.

It helped that the church did not have the power to kill Luther, as it did some critics. Luther lived under the protection of a prince, Frederick the Wise, who approved of his ideas. And Luther was able to advance his ideas as a doctor of philosophy and a Bible professor at Wittenberg University.

Other princes, kings and everyday free-thinkers were drawn to the idea that the individual believers are as important as the rituals of the church.

"This is why we have protestant churches and nondenominational churches today," says Downes.

Breaking away from Catholicism was not Luther's original intent. When he posted his critiques on the Wittenberg church door, he was hoping for reform from within, says Gritsch.

Luther also didn't intend for followers to found a church bearing his name, one with 65 million adherents around the world and 8 million in the United States. But such was the power of his thinking.

Today, admirers believe his name is worth recalling, given the courage Luther showed in speaking his conscience.

So today, Downes will post a sheet on St. Philip's door, inviting worshippers to write their own spiritual questions and concerns.

"It's always worth asking how the church is forming and reforming itself," says Downes.

"To be vital it's helpful to ask, like Luther, how do we grow and change in keeping with our understanding of what God wants from us at this moment."

• Translated the first reader-friendly Bible for Germans. This helped shape the German language from one with many dialects to one with a standard usage.

• Taught that God's grace is open to all and doesn't have to be mediated by priests. He said when you profess a belief in the power of Jesus' love, God adopts you into a life of salvation and you don't have to do anything to earn that love.

• Taught that you should be active in doing good to love your neighbor in the manner of the Good Samaritan. Having found God's love, do your best to show it to others.

• Taking on one of the most powerful forces in his world - the Catholic Church - he stood up to sanctions and death threats. In so doing, he created a new movement of independent thinking. Prior to Luther it was more common for people to simply "pray, pay and obey."

• He was an early media marvel, publishing 400 books.

• His emphasis on singing helped shape 19th and 20th century worship. His hymn "A Mighty Fortress is Our God" is still highly regarded.

• Showed a dark side of intolerance for the Jewish people. He felt the Jews were wrong-headed in not embracing Jesus. Luther's condemnations were used as a justification for persecution.

awesome!you just helped me with my history home work. i didn't know who martin luther was because im only a seventh grader. who are you anyways?
thanks,
kassi