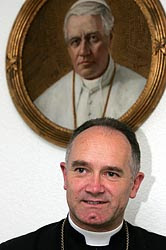 In an interview with Italian journalist Paolo Luigi Rodari, the author of the blog “Palazzo Apostolico,” Bernard Fellay, the superior general of the Priestly Fraternity of St. Pius X, said the schismatic movement demands not only a “correct interpretation” of Vatican II, but that the Council documents actually be changed.

Fellay defended his fellow excommunicated bishop, Ricard Williamson, identified by some in the media as leader of the “intransigent wing” of the fraternity. Fellay said, “Williamson and I are in agreement that it would be difficult to re-enter to the Church as it currently is.”

“The reasons are simple,” Fellay said, because “Benedict XVI has liberalized the ancient rite,” yet he has been criticized “by the majority of the bishops.” “What should we do? Re-enter the Church just to be insulted by these people?” he said.

“In addition to the ancient rite,” he continued, “the problem for us is the words Pope Benedict has dedicated to Vatican II,” because “the rupture with the past is directly related, unfortunately, to some texts of Vatican II and these texts, in some way, should be revised.”

“Ratzinger should prepare for a direct revision of the Council texts and not just denounce their incorrect hermeneutic (interpretation),” Fellay went on.

He cited as an example the declaration on religious freedom, Dignitatis Humanae. According to Fellay, the document subjects the Church to the authority of the State.

“In my opinion it should be the opposite: the State should submit to the Catholic faith and recognize that it is the religion of the State.”

Fellay said he has maintained ongoing correspondence with Cardinal Dario Castrillon Hoyos, president of the Pontifical Commission Ecclesia Dei, “but no common working document exists yet.”

There are some very strongly held "understandings" in the Church which are sometimes in direct opposition to some others - polarity.

We all need to live in patient accommodation with each other. It looks as though Benedict XVI has tried hard to accept the Lefebvrists back into the Church circle, but they do not like the other "understandings" they might encounter there.

So, they repudiate the rest of us. Well, assuming they're in good faith, I suppose they are pleasing to God. I'm not sure that they're "invincibly ignorant."