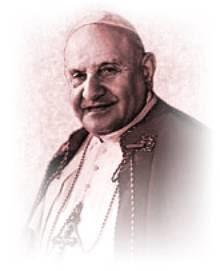 Pope John XXIII believed Padre Pio, the hugely popular Capuchin monk who was canonised in 2002, was a fraud who had "incorrect" relations with women and whose soul was in danger, according to a Vatican document unearthed by an Italian historian.

Sergio Luzzatto, whose book on Padre Pio "The Other Christ" is to be published next week after six years of research, has also found documents in the Vatican archives suggesting that Padre Pio may have faked his stigmata, the marks of the wounds of Christ, with acid.

Vatican officials say both allegations are already well known and were fully taken into account in the beatification and canonisation process.

Mr Luzzatto said his discoveries did not detract from Padre Pio's importance in religious history or his power to attract millions of followers.

He said Benedict XV and Pius XI had also been sceptical about the monk, but Pius XII had encouraged the Padre Pio cult, as did Paul VI and then John Paul II, who presided over the canonisation process.

Mr Luzzatto told Corriere della Sera he had found a note written by John XXIII dated 25 June 1960 recording his receipt of "very serious information on PP (Padre Pio) at San Giovanni Rotondo" from a Vatican investigator, Monsignor Pietro Parente of the Holy Office, who had taken notes and made secret films.

The note says Monsignor Parente "looked, and was, broken hearted".

The Pope wrote: "I am sorry for PP, who has a soul to be saved, and I pray for him intensely. What happened - that is, the discovery because of the films - si vera sunt quae referentur (if it is true what they say) - of his intimate and incorrect relations with the women who constitute his Pretorian guard, which even now stands firm around him, leads one to think of a vast disaster of souls which has been diabolically set up to discredit the Holy Church in the world, and especially in Italy."

Monsignor Parente named three of Padre Pio's "most faithful female followers" as Cleonilde Morcaldi, Tina Bellone, and Olga Ieci, as well as a "mysterious countess", telling the Pope he suspected their devotion to the monk was "not merely spiritual".

Aldo Cazzullo, a writer on religious affairs, noted that John XXIII - the former Angelo Roncalli - had "disliked and mistrusted" Padre Pio since he travelled in Apulia in the 1920s, regarding the friar's "almost medieval mystical faith" as at odds with his own modernist outlook.

In the 1960 memorandum the Pope says he feels "privileged to be free of the contamination which for forty years has clung to hundreds of thousands of souls who have been stupefied and disturbed to an unbelievable degree."

In another document which formed part of the Holy Office investigation Maria De Vito, the cousin of a local pharmacist at Foggia, testified that the young Padre Pio bought four grams of carbolic acid in 1919.

She said she had spent a month with him at San Giovanni Rotondo.

"Padre Pio called me to him in complete secrecy, and telling me not to tell his fellow brothers he gave me personally an empty bottle, and asked if I would act as a chauffeur to transport it back from Foggia to San Giovanni Rotondo with four grams of pure carbolic acid. He explained that the acid was for disinfecting syringes for injections."

The Foggia pharmacist was reported to believe that the carbolic acid could be used by Padre Pio "to cause or further irritate wounds on his hands."

A doctor appointed by the Vatican to examine the wounds carried out two examinations but was unable to find an explanation. At one stage Padre Pio was banned from celebrating Mass, but pilgrims continued to flock to San Giovanni, where he built a hospital with donations.

Padre Pio, whose real name was Francesco Forgione, died in 1968, and is universally revered in Italy, though especially in the South. He exhibited stigmata throughout his life, starting in 1911.

The Catholic Anti-Defamation League said Mr Luzzatto was "spreading anti-Catholic libels", and that canonisation was "infallible".

Followers of Padre Pio believe he exuded "the odour of sanctity", had the gift of bipolarism (being in two places at once), healed the sick and could prophesy the future.

Unfortunately, there are some important facts being left out of the book as to the story and historical facts behind the person who were responsible for the documents.
Records show that Archbishop Gagliardi who was responsible for the document had some type of personal vendetta against Padre Pio. Sadly, the Vatican had no choice but to remove the archbishop from his dioceses for incidents of sexual and monetory imporopiety. Among the many problems, there were public accusations of sexual molestation. He was also responsible for appointing a priest to a parish who had an extensive police record for `continued and habitual child molestation. So needless to say, the archbishop had some real problems, one of which was an obsession with Padre Pio.

St. Pio never retaliated against the archbishop, nor even criticized him. In fact the angriest the famous mystical priest was seen to get was with a supporter – a Pio defender – who had attacked the archbishop.

When one actually does an honest investigation of history, there is no doubt that padre Pio's stigmata was legitimate.