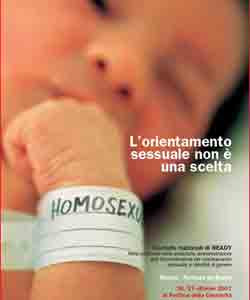 A senior Roman Catholic Cardinal has criticised an anti-discrimination poster that features a baby wearing a wristband with "homosexual" written on it.

The government of the Italian region of Tuscany is poised to display thousands of copies of the poster in public places and municipal offices as part of a campaign against discrimination.

The tagline on the posters - Sexual Orientation Is Not A Choice - has divided gay people, while conservative politicians are outraged that public money has been spent on it at all.

Vatican Secretary of State Cardinal Tarcisio Bertone has commented on the posters.

"Doing a publicity campaign like this is not a good idea," he said.

"This is a bit strange. They shouldn't have gone that far."

Roman Catholic teaching regards gay sex as a sin and that homosexuality is an "objective disorder and an "intrinsically disordered inclination."

Gay activist group Arcigay congratulated the Tuscany region on being at the "forefront" but another activist was unhappy.