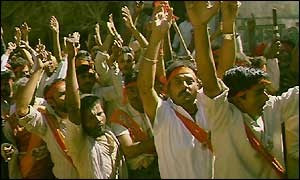 The accusation of forced conversions to Christianity has once again been used as a pretext to justify Hindu fundamentalist violence against members of the Catholic community.

Yesterday 5 sisters of the Poor Clare’s order were savagely beaten with sticks by a group of activists from Dharma Raksha Samiti (Committee for the protection of religion), a fundamentalist organisation in favour of sati (the ritual suicide of the widows).

The incident took place yesterday afternoon in Raseli, Indore diocese, Madhya Pradesh. The police have refused the diocese’ attempts to report the incident.

“We had gone to attend the Rosary Prayer at Mr. Anil‘s house. He is a catholic by birth and the driver of our convent, when they attacked us with sticks”, says Sr. Jincy.

Dharma Raksha Samiti convenor Kamal Waghela accused the sisters of converting people in the area to the Christian faith, and said that “after the prayer, picked a quarrel on this issue which lead to clash between the sisters and our workers”.

The spokesman for the Indore diocese immediately responded to these accusations: “It is nothing but finding an easy way to justify the brutality done to women religious, we will fight with tooth and nail”.

Archbishop Leo Cornelio, Chairman, Catholic Bishops Council of Madhya Pradesh and Chattisgarh too used strong words to condemn the episode: “We have been suffering silently but it looks that the fundamental organizations take it as a weakness from our part, it is n attack on women and human freedom.”

On learning of the event the diocese launched a hunger strike in protest. Local police have refused to launch an investigation into the episode until the Catholic authorities agree to end the strike set for October 28th.

In fact today in Indore a meeting of Madhya Pradesh Industries is due to take place and the Catholic’s protest against police inaction and government disinterest could seriously harm the image of the event.

Msgr Cornelio confides his worries: “What is alarming is that these fanatical outfits are so powerful politically, that the authorities cannot take care of Law and Order and fail in their duty to protect the citizens and hence these fanatics get encouraged to intensity their hate propaganda and anti-minority sentiments to carry out act of violence towards the monitory and get away scot free. India is a democratic country and this cannot be tolerated, our religious freedom is non-negotiable.”