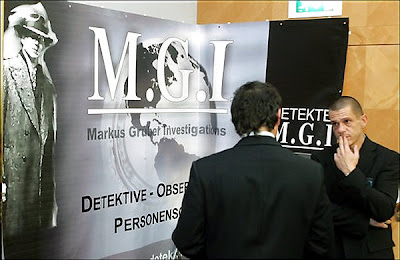 In a city where "I do" often turns into "I want out," a fair for those wanting to untie the knot seemed a sure hit.

But journalists easily outnumbered those looking for advice on how to end their marriages on Saturday, the first day of what was billed as the world's first divorce fair.

Detectives were ready to catch a spouse in the act, mediators to help ease the pain of separation, a laboratory to conduct paternity tests, and, of course, lawyers to do everything else.

So where were all those in struggling marriages?

The Austrian capital would seem a good venue for the event, with its 66-percent divorce rate, near the top for European cities. The country itself has a rate of more than 50 percent.

In the United States, the rate is thought to be between 40 and 45 percent.

But only a few dozen clients meandered through the two conference rooms of a downtown luxury hotel in the space of an hour, and bemused exhibitors were kept busy mostly by TV crews lining up to interview them.

"It doesn't matter," said real estate agent Christian Novotny, there to offer advice on how to sell homes for splitting couples — or to buy ones for new singles. "Tomorrow's another day."

"Too many cameras," said Berhard Spernern, one of the few at the event hoping for a divorce. "I think that's part of the problem — a lot of people don't want to be seen or be photographed here."

Spernern said he was happy to have come nonetheless, saying a talk with a lawyer was helpful in letting him know that he has an automatic right to divorce after a three-year separation. And he said he would suggest to his spouse — who he said does not want to end their marriage — to join him in mediating their dispute with one of the experts he made contact with here.

Most of the 16 firms with stands at the fair offered standard divorce fare — legal services, private investigations, mediation and conflict management. But some catered to more unusual needs.

"Many people come to us when they are already in the middle of divorce proceedings," said Susanna Haas, whose $600 DNA analysis promises to end bickering about why the little one does not look like daddy. "Proof of parenthood can play an important role in divorces."

In the next room, Isabella Stozek, whose "Hairdreams" offered hair extensions, volume treatments, highlights and other regimens, said such makeovers were important to women looking for a new look to accompany their new start.

"They want to leave their old lives behind, and how better to do that than with these?" she says, sweeping her hand over a display of wigs, pony tails and braids.

At a stand close by, brochures for "MyDates" promised those interested a chance to "meet 25 singles in two hours."

Even the Roman Catholic Church got into the mix, with a stand to offer advice for newly single parents, and social workers from the city of Vienna were ready to counsel women in sudden need.

Still, the emphasis Saturday was less on the emotional and more on the financial and legal aspects accompanying a divorce — a fact criticized by some looking for more than just a chance to limit the mess of their marriage breakup.

"I miss the human aspect," said Ingrid, who refused to give her full name, explaining that divorce was a private matter. "It would be nice to have people here to talk to for those who are not yet willing to take the leap."