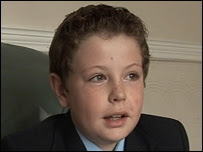 The case of a schoolboy who was denied a free bus pass because he had not been baptised has been referred to the Equality and Human Rights Commission.

But Durham County Council said he could not have free travel because neither he nor his parents are baptised Catholic.

Durham County Council said rules for faith schools were clear and parents should be aware of them when applying for places.

Elliott's Catholic father Stephen, 48, and mother Treena, 45, an Anglican, did not have him baptised because they want him to choose his religion.

They are now paying the £6-a-week bus fare themselves.

Ms Hall, who has taken up the family's case, said: "Whether or not a child is baptised should be a matter for the parents, not the council. And eligibility for free travel to and from school should not depend on religious convictions."

"I have previously written to the schools minister and Durham County Council and have now approached the Equality and Human Rights Commission."