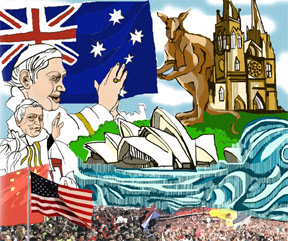 The 140,000 Catholics expected to visit Australia next year for World Youth Day will have special visa privileges, officials said Friday.

Sydney is hosting the July 15-20 event, and officials expect 500,000 people to gather for Pope Benedict XVI's first visit to Australia.

Officials said there would be a 'tailor-made visa application system' that would allow people attending the event to stay for up to three months.

All visitors to Australia need a visa, and prospective travellers from some countries are closely vetted before a visa is issued.

World Youth Day organizer Cardinal George Pell has yet to finalize the venue where the papal mass will be held.

The city centre Randwick Racecourse was the first choice of organizers, and the New South Wales state government had pledged to make the venue available.

But the Australian Jockey Club (AJC) is adamant that the venue will not be released until compensation arrangements for the racing industry have been agreed.

'Parties are yet to reach an agreement as to the form of consent and permissibility of World Youth Day at Randwick,' AJC commercial manager Darren Pearce said. 'Until there is agreement, the venue is not a certainty.'

Organizers chose Randwick because of its central location and the availability of public transport.

everything is very exciting!