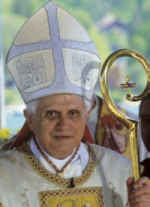 The Chilean government has warned pharmacies refusing to sell the morning-after contraceptive pill that they could face stiff fines or closure.

Major pharmacy chains have not been selling the pill recently, arguing they could not buy stocks locally.

The government responded by importing supplies and said the stores now had no excuse for not selling the pill.

Pope Benedict on Monday said Catholic pharmacists had the right to object to dispensing emergency contraception.

The sale of the morning-after emergency contraceptive pill is highly controversial in Chile and has been challenged repeatedly in the courts by conservative and religious groups.

The row between the pharmacy chains and the government has been building for several weeks, with the three major chains saying they were not selling it because it was not available locally.

The government's initial response was to fine the stores and import stocks.

Deputy Health Minister Lidia Amarales warned that the government would be prepared to close a pharmacy that refused to sell the morning-after pill.

One of the chains, Salcobrand, said the government's actions were a violation of its freedom of opinion about the pill which it said was abortive. "We express conscientious objection to being forced to sell a product that can have that effect," a Salcobrand company statement quoted by the Associated Press said.

On Monday, Pope Benedict XVI said in Rome that pharmacists had the right to conscientiously object to dispensing emergency contraception or euthanasia drugs.

"Pharmacists must seek to raise people's awareness so that all human beings are protected from conception to natural death, and so that medicines truly play a therapeutic role," the Pope said.

Despite having some of the most restrictive anti-abortion laws in the world, it is estimated that in Chile 35% of all pregnancies are terminated illegally.

The morning-after pill may prevent pregnancy if a woman takes it within 72 hours of having sexual intercourse.