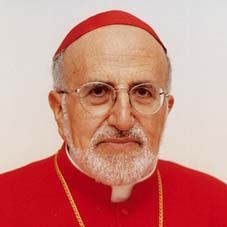 The Chaldean patriarch of Baghdad, recently named Iraq's first cardinal, said Tuesday that rising violence has made life worse for Iraqi Christians since the U.S.-led invasion, but he is optimistic that "peace will prevail."

Emmanuel III Delly, who will go to the Vatican next month to collect his cardinal's red hat, must balance the dangers facing his small Catholic community with a mission to reach out to Muslims.

The 80-year-old head of the ancient Chaldean Church in Iraq said the hopes of freedom in the aftermath of Saddam Hussein's ouster in 2003 have given way to widespread fear.

"We had hoped that the situation would be better. In fact it is worse," he told The Associated Press during an interview at his guarded compound in western Baghdad.

"Car bombs, roadside bombs, killings, assassinations. All of these things were not happening in the past. There was stability and security."

But Delly, who was one of 23 new cardinals named by Pope Benedict XVI on Oct. 17, blamed the violence on extremists and said it is his job to reach out to Muslims and followers of other faiths to promote unity.

"I pray every day to God to enlighten the minds of the officials and guide them to the road of peace and reconciliation," he said.

Often fiddling with the large silver cross on a chain around his neck, the Chaldean spiritual leader said he visits leaders from Islam's Shiite and Sunni sects during their holy days and they do the same on Christian holidays.

He said he received "hundreds of calls from Sunnis and Shiites" congratulating him on his promotion to cardinal.

"We all want peace," he said, sitting in an ornate reception room in a building off a courtyard lined with flower bushes and a statue of the Virgin Mary in the center. "We should accomplish this with actions and not only with words."

Delly has been outspoken in the past about the need to protect Christians, who comprise less than 3 percent of Iraq's 26 million population.

In May, he issued a joint statement with Patriarch Mar Dinka IV of the Catholic Assyrian Church of the East saying Christians in a number of Iraqi regions faced "blackmail, kidnapping and displacement" at the hands of Sunni Arab insurgents led by al-Qaida in Iraq. They complained the government "has kept silent and not taken a firm stance."

But Delly had only a message of unity Tuesday, saying that Iraqis of all sects have suffered from the chaos and that he is optimistic security is improving.

"We have been living with our Muslim brothers for 14 generations and we have common interests with each other," he said. "The danger is hitting everybody without exception. We pray to God that peace will prevail and every one of us should work for peace."

The toned down remarks came three days after Delly received a promise from Prime Minister Nouri al-Maliki to protect and support Iraq's Christian community, which is particularly vulnerable since it has little political or military clout to defend itself.

Delly, who speaks Arabic, French, Italian, Latin, English and Aramaic, said the Shiite Muslim prime minister called his promotion to cardinal "an honor for all Iraqis" and promised to send a government delegation to Rome for his Nov. 24 ordination.

"He told me he is doing his best to make Iraqis feel comfortable and live in peace in Iraq. I told him it is our duty to work for peace," Delly said. "We are working for the sake of all Iraqis."

The country's Christian population was estimated at more than 800,000 before the war—the majority of them Chaldean-Assyrians and Armenians, with small numbers of Roman Catholics.

They were generally left alone under Saddam's regime, and many, including former foreign minister and deputy prime minister Tariq Aziz, reached the highest levels of power.

But after Saddam's ouster, Christians became perceived as supporters of the U.S., the Minority Rights Group says.

Christians were increasingly targeted by the Sunni-led insurgency, causing tens of thousands to flee, isolating many of those who remained in barricaded neighborhoods and forcing them to hide their religious affiliation when venturing out.

Up to 50 percent may have left Iraq, says the U.S. Commission on International Religious Freedom, which advises the U.S. government.

Attacks on Christians peaked with a coordinated bombing campaign in the summer of 2004 aimed at Baghdad churches and again last September after the pope made comments perceived to be anti-Islam.

The German-born pontiff later said that his words about Islam were misunderstood and that he was sorry Muslims were offended, and he has recently been calling for dialogue between Christianity and Islam.

Delly, who was born in Tel Kaif, north of the northern city of Mosul, said Benedict asked him to reach out to Iraq's Muslims.

"He wants the good of everybody, and he asked me to open dialogues with our Muslim brothers here. This is his message to the Muslims and the whole world," Delly said.