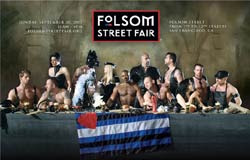 An apology issued by the Miller Brewing Company over a poster that promoted a homosexual event in San Francisco by copying Leonardo Da Vinci's painting of "The Last Supper" was rejected on Monday by the leader of a national Catholic group, who charged that either the corporation doesn't "get it" or "they think we're stupid."

The apology, which was released late Friday, "is nothing but a rehash" of what the company has been saying all along, said Bill Donohue, president of the Catholic League for Religious Civil Rights, in a statement of his own on Monday.

"It limits its apology to the use of its logo on the offensive 'Last Supper' promotional poster," Donohue said, which replaced Jesus and his disciples with half-naked homosexual sadomasochists, but "it still refuses to apologize for the anti-Catholic nature of the event itself."

That event was the Folsom Street Fair, which bills itself as "the world's largest leather festival" and is held on the last Sunday of September, when it draws about 300,000 people each year.

"The poster was the least offensive part of this Catholic-bashing forum," Donohue continued.

"What was even more offensive was the sight of Christian symbols being sold at this Miller-sponsored fair as sex toys. Then there was the incredible sight of a stripper and a man dressed as Jesus hoisted in cages above a Catholic church on a Sunday," he added.

"This was done to provoke, taunt and insult Catholics. Evidently, Miller thinks these kinds of things are okay," Donohue said.

In the latest news release on this subject, Miller Vice President Nehl Horton said that 'when one group actively disrespects another, we cannot support its events and activities,'" Donohue said.

"This is a fine statement, if only it were true. The fact is Miller has made no pledge not to sponsor the Folsom Street Fair again," he stated.

"Accordingly, we will continue the boycott and the anti-Miller PR campaign."Donohue also stated that the boycott has "reached a new level."

"In addition to the countless number of Catholics who have called us joining the boycott, we are now drawing the support of high-ranking members of the Catholic clergy, the Knights of Columbus in Illinois and New York, and the Chaldean community in Michigan," he noted.

"We are not asking for much," he added. "Just as important, we will not settle for less."

"Miller has been a strong partner to countless local organizations throughout the country for decades," Julian Green, senior manager of media relations for the Miller Brewing Company, told Cybercast News Service on Monday.

"Consumers have come to trust us as a company committed to doing the right thing. We hope that consumers will forgive us for this serious error and have confidence that our response in this case has continued to demonstrate our commitment to upholding their trust," Green added.

Friday's apology from the Miller Brewing Company said the corporation "has taken action to ensure that such an incident will not happen again."

"Miller has just completed an exhaustive audit of its marketing procedures for approving local marketing and sales sponsorships, and it is implementing plans to tighten its compliance procedures," the release stated.

"The company has received assurances from its local distributor in San Francisco and from Folsom Street Events that future marketing materials and event activities will fully comply with Miller's marketing policies and procedures," the statement added.

The poster first drew attention - and criticism - from the conservative group Concerned Women for America on Sept. 25.

"Gay activists disingenuously call Christians 'haters' and 'homophobes' for honoring the Bible, but then lash out in this hateful manner toward the very people they accuse," said Matt Barber, CWA's policy director for cultural issues, at the time.

Within 24 hours, Miller Brewing Company asked to have its logo removed from the advertisement, even though Copper said there was no intention "to be particularly pro-religion or anti-religion with this poster; the image is intended only to be reminiscent of the 'Last Supper' painting."

On Sept. 26, the Catholic League issued a press release expressing outrage that Miller still supported the event despite the fact that a portion of the money raised by the festival was going to the Sisters of Perpetual Indulgence, an anti-Catholic group that held a fundraiser entitled "The Last Supper With the Sisters."

The following day, Donohue announced that his organization was boycotting Miller Brewing Company products and urged more than 200 other religious organizations to do the same.

A Cybercast News Service investigation determined that some of the funding for the festival came from a city program to support "parades and celebrations," as well as a "Zero Waste" grant from the San Francisco Department of the Environment to promote "recycling, materials reuse and waste reduction for municipal, commercial and residential clients."