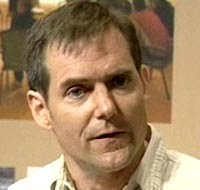 James Loney, who was held by militants in Iraq, says a Catholic-organized peace conference in Winnipeg rescinded his invitation to speak because of his sexual orientation.

Loney, one of four peace activists taken hostage in Iraq in November 2005, was invited to speak about his experience and about peace at the conference this weekend, which is organized by the Roman Catholic Archdiocese of Winnipeg.

James Loney says the conference's decision reminds him of how he had to hide his sexual orientation while a hostage in Iraq.

Loney said he was later told he was uninvited because he is in a relationship with a man.

"I asked if it was because I was gay, and the answer was, 'No, it's because you are in a relationship with man,'" he told CBC News.

"I was quite disappointed and sad. I had been invited several months before and I had asked if it was going to be an issue, and I was assured that there was a clear and solid invitation and it wasn't going to be a problem."

Winnipeg Roman Catholic Archbishop James Weisgerber defended his decision to withdraw the invitation on CBC's Information Radio Friday morning, saying the matter was not about sexual orientation, but about Loney's public criticism of the church's teachings on sexuality.

"I kept hearing more and more objections, and I began to do some research and I realized that he has taken very public and a very clear opposition to the church's teachings in this area. That's a very different matter."

Weisgerber said he felt "humiliated" over what he acknowledged was a "hurtful" act toward Loney.

Loney said the situation has parallels with his time as a hostage in Iraq, when his sexual orientation was kept secret out of concern that if his captors knew, it could have further endangered his life.

"That was a very clear example of the violence of homophobia, of having to be invisible and silent," he said.

"This feels very similar to that. It's an act of silencing and making me invisible as a gay person, and only because of that."

Loney is still coming to Winnipeg and will speak about his experience in Iraq on Sunday at Augustine United Church.

Loney and two colleagues from Christian Peacemakers Teams — Canadian Harmeet Singh Sooden and Briton Norman Kember — were rescued in March 2006, 117 days after being taken hostage by a little-known Iraqi group, the Swords of Righteousness Brigade.

Recent surveys of young people have found that they believe Chritianity is "anti-homosexual." Evidently thay feel such an attitude is seriously discriminative, and they do not concur.

The topic of this meeting was not advertised as being on sexual relationships. But this sort of behaviour, cancelling a firm invitation, is a guarantee of a sell-out. Whom will that help?

Hooray!!! Gay is dead in Winnipeg!