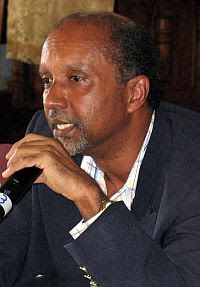 The spread of HIV and AIDS in the Caribbean is one of the major issues now facing churches in the region, says Gerard Granado, general secretary of the Caribbean Conference of Churches.

"In 1973, when the Caribbean Conference of Churches was formed, there was nothing in the world known as HIV/AIDS," Granado told leaders of the World Alliance of Reformed Churches meeting near Port of Spain on 25 October.

"Now one of our biggest programmes is the response to HIV/AIDS."

He pointed out that the Caribbean region is second only to sub-Saharan Africa in terms of the rate of HIV infection.

According to UNAIDS figures, the pandemic claimed an estimated 24 000 lives in the Caribbean in 2005, making it the leading cause of death among adults aged 15 to 44 years.

A recent set of guidelines developed by the CCC for Caribbean Faith-Based Organisations to deal with HIV/AIDS had gained support from international organizations such as the World Bank, he noted.

Granado is a Roman Catholic layperson who has led the CCC since 1999. The church conference, whose headquarters are in Trinidad, groups 33 member churches in 34 territories.

It was the first regional ecumenical organization to include the Catholic Church as a founder member alongside Protestant and Anglican denominations.

Among other issues that now challenged the Caribbean churches in a way that was not the case when the CCC was founded, is that of substance abuse and narcotic trafficking, and the related rise in criminality and the proliferation of guns and small arms, Granado said. "We don't manufacture arms here but the gangs have more sophisticated weapons than the police," said Granado.

He referred to a recent case in which a young man apprehended by police possessed a US-made lightweight submachine gun similar to the well-known Israeli Uzi. Granado told the WARC leaders that he was engaged in a process of "re-founding" the CCC.

He pointed to initiatives such as the development of a regional forum for National Councils of Churches in the Caribbean.

This aimed to offer an arena for theological reflection, as well allowing councils in neighbouring countries and territories to become aware of what each other were doing.