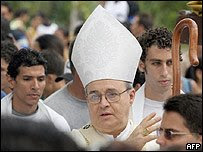 The Archbishop of Havana, Cardinal Jaime Ortega, has announced that Vatican Secretary of State, Cardinal Tarcisio Bertone, will visit Cuba in January of 2008.

Cardinal Ortega said the visit would “revive the spirit of the presence of John Paul II in Cuba in 1998.”

"It will also be recognition of all that the Pope’s visit meant and a chance to live that moment again in order to continue in that same spirit that must continue to grow.”

He recalled that Pope John Paul II’s visit to Cuba helped “open new possibilities” for the Church’s mission in that country, and at the same time “contributed to improving Cuba’s image in the world.”

Cardinal Ortega said relations between the Church and the State in Cuba “are good, but they could be better.”

He noted that on the feast of Our Lady of Charity on September 8, the Church was given access to nine radio stations “in prime time” to broadcast a message from the Cuban bishops and to invite the public to processions and other public Church events.

In addition, he said, in some dioceses the Church is being allowed greater access to prisons for prison ministry.

“This is going to spread, it’s a plan that’s going to continue,” he added.
Cardinal Ortega stressed, however, that the possibility of the Church having its own media outlet is still “an aspiration” and that talks are on-going with the government in this regard."