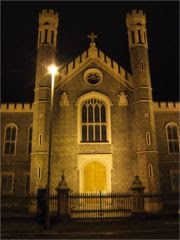 A 160-year old Belfast church is to close at the end of the month for major refurbishment.

Some 23,000 bricks some of which suffered damage in the World War Two blitz and bombings during the Troubles will be replaced by hand.

The refurbishment will also entail the replacement of the church's windows in Irish oak, while two confession boxes are to be removed and replaced with shrines to St Anthony and St Francis.

The church's vaulted fan ceiling, which is an imitation of the Henry VII chapel in Westminster Abbey, as well as its ornate artwork and Gothic architecture make it a popular stop-off point for tourists to the city.

Parish priest Fr Anthony Curran said some £900,000 had already been raised but much more is now needed to fund the huge project.

"We are raising all the money ourselves but £3.5 million is too much to ask people in the area to find," he said.

"This is not just a parish church, it is a city centre church, where people from all over Belfast come to visit and worship" he added.

"Raising the money should come from all people and not just locals".

Fr Curran said the maintenance of St Malachy's was the whole of Belfast's responsibility.

The church is an 'A' listed building for its architectural significance. Its foundation stone was laid in 1844. Originally St Malachy's was intended to be a Cathedral Church and seat 7,000 worshippers.

However, when the Great Famine broke out, it was decided that the funds would be better spent elsewhere and the plans were downsized.