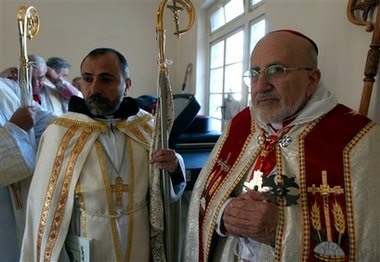 The Iraqi government is committed to protecting and helping the Iraqi Christian community whose members have been emigrating in large numbers because of the violence prevailing in the country.

Prime Minister Nuri al-Maliki made a statement to that effect when he received Emmanuel III Delly, Patriarch of Babylon for the Chaldeans, on Saturday in Baghdad, to congratulate him for his recent appointment as cardinal.

Benedict XVI announced in fact that he was one of 23 new princes of the Catholic Church.

Maliki pledged his support to the patriarch in his “new role,” which the prime minister seems to have interpreted more in political than in religious terms.

Delly's nomination “is a victory for Iraq in the international community which we hope will contribute to bring peace against terrorism, extremism, and sectarianism,” he said.

The prime minister said his government was willing and determined to defend the small community and stem the flight of its members, this according to a statement issued by the Prime Minister’s Office.

For his part, the Patriarch, who heads the Chaldean Church in Iraq and the world, thanked Maliki for his efforts in favour of peace.

But when two Syro-Chaldean priests were abducted on October 17, some members of the Christian community lamented the indifference of Iraqi authorities to their fate.

Since 2003 Iraqi Christians, who are mostly Chaldean, have been targeted by Islamic extremists because they are seen as allies of the US army.

Like Shias and Sunnis Christians have experienced abductions, murders and violence, but they are more vulnerable than the Muslims because of their lack of political clout and their refusal to defend themselves militarily.

Before 2003 Chaldeans numbered some 800,000 but the brutal persecution to which Christians are subjected has forced many families to flee to neighbouring countries.