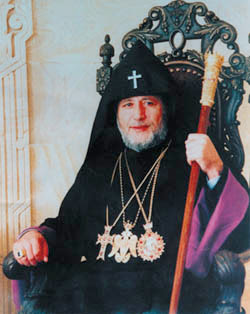 Greeted by boys carrying symbolic gifts of bread, salt and flowers, the spiritual leader of the Armenian Church and its 7 million members worldwide stepped from a chartered jet in southeastern Wisconsin this week bearing messages of love, tradition and the need for ecumenical and interfaith unity in a troubled world.

His Holiness Karekin II energized people from the three Armenian parishes under his jurisdiction here - St. Mesrob in Racine, St. John the Baptist in Greenfield and Holy Resurrection in South Milwaukee - with calls for the observant and those who've drifted to remember their faith and culture.

This month, he spoke in Washington, D.C., in support of a now-stalled House resolution that would label as genocide the killings of, according to some estimates, 1.5 million Armenians by Ottoman Turks from 1915 to 1923.

Turkey, a key supply route to U.S. troops in Iraq, recalled its ambassador to Washington and warned of serious repercussions if the largely symbolic resolution passes.

Karekin said that recognition and condemnation of this genocide are needed to help prevent future genocides.

While here, he focused on the need for Christians, Muslims and others to get along.
Armenia, where he is based, has something to offer in that regard, he said.

It was the first nation to adopt Christianity as the official state religion, in A.D. 301, before the Roman Empire did.

And, despite being surrounded or occupied by non-Christian nations and cultures - including the Persian and Ottoman invasions and Soviet rule - the Armenian people did not give up their Christianity, said Father Yeprem Kelegian, St. Mesrob's pastor.

Karekin - who carries the title Supreme Patriarch and Catholicos (universal leader) of All Armenians - said Armenians had learned how to work, pray and live in harmony in Islamic countries.

"This experience shows us that if we have the love of God, we can understand that we are brothers, we are creations of God, although we have different faiths, different cultures," Karekin said. "We are sons and daughters of the one God, and also God gave us this world that we cherish for him."

He is on a nearly 20-city, monthlong tour of the Diocese of the Armenian Church of America (Eastern), including small communities and large cities such as Chicago, Minneapolis-St. Paul, New York, Boston and Dallas.

This was the first visit here of a supreme patriarch in 47 years.

His one-day visit had an impact on many of the estimated 1,500 Armenian American households in southeastern Wisconsin, Kelegian said.

"I think it's the biggest event in our life we will ever encounter, even when we get older, probably bigger than my wedding," Monica Heller, 27, of Racine, who is not engaged, said at the airport.

After meeting with Karekin and about 24 leaders from area parishes, Heller added, "I feel now that, after seeing him, it does increase my spirituality and also my sense of Armenian heritage, and it makes me want to do more, especially for the people of Armenia."

I was just passing through and had to comment regarding one sentence in your article on the visit of His Holiness Karekin II to America this past month.

"This was the first visit here of a supreme patriarch in 47 years."

This is an erroneous statement as His Holiness Vazken I of blessed memory was in America officiating the groundbreaking ceremony for the St. James Armenian Apostolic Church in Los Angeles, California on May 19, 1968 (39 years ago). He later returned in 1994 which would have just been 13 years ago. I remember because I met him and received a cross from him when I was in 4th grade at the school he visited.