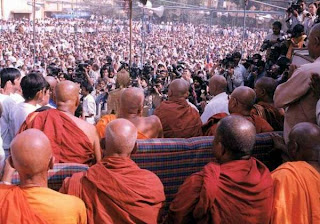 Thousands of Tribal Hindus and Dalits converted to Buddhism in a mass ceremony in Mumbai yesterday in order to escape from the rigid caste system and thus be treated as ‘human beings’.

Shravan Gaikwad, a representative of the Dalit group Samatha Sainik Dal, estimated that about 5,000 people took part in the ceremony, which was held to mark the 50th anniversary of leading Dalit leader Bhimrao Ambedkar's conversion to Buddhism.

For many mass conversion appears to be only way to escape the rigid Hindu caste system, which places Dalits and Tribals at the bottom of the social hierarchy, and, as one Dalit activist put it, start being treated “as human beings”.

At least one sixth of India's 1.1 billion people are classed as low caste.

Despite job reservation (affirmative action) for members of Dalit and Tribal communities, their social status and economic conditions have not greatly improved.

Hindu nationalist are opposed to Hindu converting and in several Indian states (especially those ruled by the Bharatiya Janata Party) laws against conversion have been adopted, in particular if it involves Hindus converting to Christianity or Islam.

Converting to Buddhism does not however elicit much negative reaction, since many in India believe Buddhism to be an extension of Hinduism.

By contrast, two weeks ago two Catholic priests were publicly beaten after being accused of proselytising.