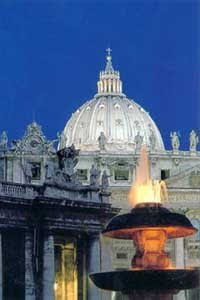 Pope Benedict is coming under mounting criticism from his former German theologian colleagues, one likening the Catholic Church's doctrinal office, that the pontiff once headed, to a 19th century censorship bureau.

Its censure in March of Father Jon Sobrino, a leading liberation theology proponent, prompted an appeal for a thorough overhaul of the Congregation for the Doctrine of the Faith (CDF), the modern-day successor of the Inquisition.

"The structure of the CDF must be reformed," Peter Huenermann told Reuters by telephone from Tuebingen, Germany.

"It still operates just like the censorship bureaus most European countries had until the end of the 19th century," Huenermann, the appeal's author and a retired theology professor from Tuebingen University, said.

About 130 theologians in Germany and Austria have backed the appeal and messages of support are starting to come in from other countries as it gets translated.

The protest amounts to a vote of no confidence in the way Benedict, who headed the CDF for 24 years before becoming pope in 2005, deals with critical thinkers in the Church.

The European Society for Catholic Theology, based in Leuven, Belgium, has also protested against the CDF censure, saying it was badly argued and had ignored "the theological developments of the last 50 years."

Huenermann, whose Tuebingen colleague Hans Kueng the CDF banned from teaching Catholic theology in 1979, said there was a need for change.

"It has a small staff of functionaries ... who work from denunciations they get," he said. "But we live in a time when theologians everywhere are constantly researching new topics. There are many new issues, like bioethics and technology."

The CDF, now headed by Cardinal William Levada from the United States, said Sobrino's "Jesus the Liberator" and other writings contained "erroneous or dangerous" passages that stressed Christ's humanity more than his divine nature.

In his article, Huenermann disputed the criticisms the CDF made and said some were wrong, unsubstantiated or "based on a hasty reading" of Sobrino's books.

He said the CDF should work like an academic review board, using modern methods such as peer review for publications to allow theologians to test out new ideas. He said he and some colleagues were considering drawing up a proposal for reforms.

Huenermann launched the protest wave in April by publishing an article in the German Catholic monthly Herder Korrespondenz calling for "modern quality control" for Church theology.

Colleagues created a virtual petition by sending in emails declaring their support for his appeal.

The article has been translated into Spanish, Portuguese, Italian, French and Czech.

Benedict, the former Cardinal Joseph Ratzinger, taught theology in several German universities including Tuebingen before taking over the CDF, where he disciplined many liberation theologians and kept close tabs on Catholic theology professors.

Asked why German theologians were leading the protest against the office once led by the German Pope, Huenermann laughed and said: "Maybe because we still trust him enough to show some understanding for this."