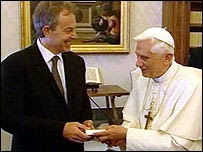 Tony Blair will be travelling to the Vatican to meet the Pope before standing down as Prime Minister next month.

A Downing Street spokeswoman said Mr Blair was keen to hold talks on "interfaith" issues with Benedict XVI in the run-up to a major conference on Islam being staged in Britain.

"He wants to discuss the EU summit with Mr Prodi and discus interfaith issues, particularly in light of the forthcoming conference on Islam here."

The visit - likely to take place early next month - will be Mr Blair's second audience with the Pope since he succeeded John Paul II in April 2005.

In July 2006, the pair discussed such issues such as terrorism, globalisation and poverty. It is likely to reignite speculation that Mr Blair intends to convert to Catholicism once he has left Number 10 in favour of Gordon Brown on June 27.